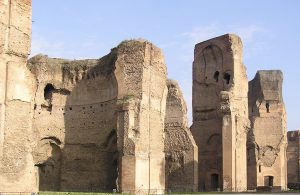 The Baths of Caracalla or Antoniniane (in Latin: Thermae Antoninianae, from the full name of the emperor Caracalla, belonging to the Severan dynasty) are one of the greatest examples of imperial baths in Rome.still preserved for most of their structure and free from modern buildings. They were built by the emperor on the Piccolo Aventine between 212 and 216 AD. (as shown by the laterite stamps) in an area adjacent to the initial stretch of the Appian Way, about 400 m outside the ancient Porta Capenaejust south of the venerated Camene wood.

These public baths were the most impressive ever built in the Roman Empire until the inauguration of theBaths of Diocletian(306).). They primarily served the residents of the I,II and XII Augustan region (the whole area between the Celio, the Aventine and the Circus Maximus).

In 2016, the museum circuit of the Baths of Caracalla, the Tomb of Cecilia Metellaand theVilla of the Quintili was the 26th most visited Italian state site, with 268,449 visitors and a total gross income of 947,556.00 Euros. 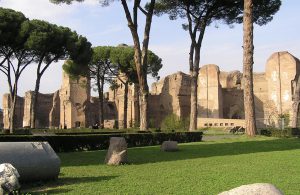 The plan of the complex is inspired by the model of the elegantbaths of Trajanon the Esquiline, considered the prototype of the Roman imperial baths: a vast quadrangular enclosure used for various services encloses a garden and a central body containing dressing rooms, bathrooms and gyms.[10].

At its widest extent, including the enclosure, the complex measures 337×328 meters (including the exedras it reaches 406 meters wide), with a central body of 114×220 meters[4](including the projection of the calidarium you get to a length of 140 meters). The orientation of the complex, as in the baths of Trajan, took full advantage of solar exposure, with the calidarium located on the south side, illuminated by large windows and protruding from the main structure as a forepart.

The baths were equipped with a complex network of underground rooms, where there were service rooms that allowed a practical management of the spa complex completely hidden from the eyes of visitors. In one of the basements near the north-west exedra was installed a mithraeum, the largest found in Rome, which is accessed from outside the enclosure.