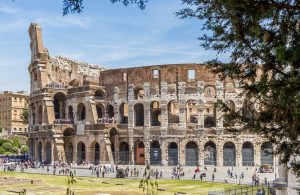 The Colosseum, originally knownAmphitheatrum Flavium or simply as Amphitheatrum, located in the center of the city of amphitheater in the world. Rome, is the largestamphitheater of the world. Capable of holding an estimated 50,000 to 87,000 spectators, it is the most important Roman amphitheater, as well as the most impressive monument of theancient Rome that has come down to us. Inserted in the 1980 list of the World Heritage Sites fromUNESCOtogether with all the Historic center of Rome, the Extraterritorial zones of the Holy See in Italy and the Basilica of St. Paul Outside the Walls, in the 2007 the complex, the only European monument, has also been included among the New Seven Wonders of the World, following a competition organized by New Open World Corporation (NOWC).

The amphitheater was builtin Flavian timeson an area on the eastern edge of theRoman Forum.. Its construction was started by Vespasian in 70 A.D. and inaugurated by Titus in 80 A.D., with further modifications made during the empire of Domitian. in 90. The building forms an ellipse with a perimeter of 527 m, with axes measuring 187.5 and 156.5 m. The arena inside measures 86 × 54 m, with an area of 3 357 m². The current height reaches 48.5 m, but originally reached 52 m. The structure clearly expresses the architectural and constructive Roman concepts of the first Imperial Agebased respectively on the curved and enveloping line offered by the elliptical plan and on the complexity of the construction systems. Arches and vaults are linked together in a tight structural relationship. 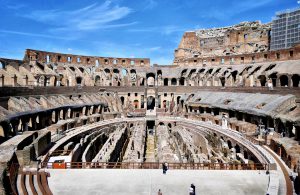 The name “Colosseum” spread only in the Middle Age, and derives from the popular deformation of the Latin adjective “colosseum” (translatable into “colossal,” as it appeared in theHigh Middle Ages between the one- and two-storey houses) or, more probably, from the proximity of the colossal acrolithic statue of Nero that stood nearby.] Soon the building became a symbol of the imperial city, expression of an ideology in which the celebratory will comes to define models for the leisure and entertainment of the people.

In ancient times it was used for gladiatorial shows, other public events (hunting shows, naval battles, re-enactments of famous battles, and dramas based on mythology classic). The tradition that wants it to be the place of martyrdom of Christians is unfounded. No longer in use after VI century, the huge structure was variously reused over the centuries, even as a quarry of material. Today it is a symbol of the city of Rome and one of its major tourist attractions in the form of archaeological monument regularly visited.

In 2012, the conditions of the Colosseum’s structure caused concern, following studies that had identified over three thousand lesions and an extensive state of cracking. Moreover, a 40 cm inclination of the structure was detected, probably due to a subsidence of the foundation slab on which it rests.

In 2018, the archaeological circuit Colosseum, Roman Forumand Palatine obtained 7 650 519 visitors, making it the second most visited Italian state museum site (the first among those with a fee), behind the Pantheon.